Insulin injection is easier and more fun with Insulin Pens 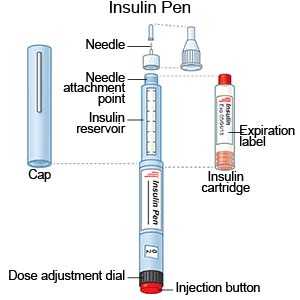 For diabetics in ancient times, injecting insulin could be the most annoying part of the treatment they are undergoing. Not to mention those who have their own fear of syringes. Schedule injections can be severe torture that can cause stress. The emergence of insulin pens in the 1990s then became a breath of fresh air for people with diabetes (a term for people who have diabetes) who need insulin injections. The use of insulin pens is gaining in popularity and is shifting the use of syringes and insulin vials.

Unlike syringes that blatantly display needles, insulin pens are more "friendly" for people with diabetes who have a phobia of syringes. As the name implies, insulin pen is a tool to deliver insulin into the body that is shaped like a pen. You must keep sticking needles into your body to administer insulin only in a better way. This tool allows you to make insulin injections more easily than those offered by insulin syringes.

In general, this type of injection is divided into two types, namely disposable and which can be used repeatedly. Disposable insulin pens usually come with pre-filled insulin containers. All of these injection pens must be removed if the insulin in the container has been used up.

Meanwhile, reusable insulin pens do not require you to get rid of the whole injection pen when the insulin in the container has run out. You can just replace the insulin container with a new one when it has been used up. Some companies that have this product are Toujeo and Lantus.

What makes this method of administering insulin with an injection pen preferred is that the patient does not need to see a horrible long needle. The inner needles on injection pens, both disposable and those that can be used repeatedly, mostly use very short and thin needles. You might even only be able to see the tip of the needle on the tip of your insulin pen.

Make sure you replace the syringe every time you inject it with a disposable insulin pen or one that can be used repeatedly. With proper care, you can use a reusable insulin pen for several years. Insulin syringes are usually available in several lengths and thicknesses. However, almost all types can be used on every insulin pen.

The advantage of using this tool

Practical
This object offers several advantages for people with diabetes who need insulin injections compared to using syringes and vial bottles. The first advantage you get is practicality. By using an insulin pen, you no longer need to bother carrying small bottles of insulin and needles and syringes everywhere. You also do not need to be bothered anymore by the activity of transferring insulin from a small bottle (vial) to the syringe.

One complication that can occur in diabetics is vision problems. This disorder can be difficult for them when they have to measure the amount of insulin that must be transferred from the vial to the syringe. With this object, the ritual of insulin injection will make it easier for them to undergo their medical obligations.

Lack of pain
One side effect of injecting insulin is the possibility of a reaction at the injection site, such as swelling, redness, and pain. The insulin pen has a very thin and short needle. It also plays a role in helping reduce the pain caused by injection.

In a study of 74 diabetic patients, the researchers found that the use of an insulin pen did not cause much pain during injection compared to using a syringe with a longer needle. The size of syringes possessed by this object also reduces diabetics' fear of needles.

Easy
As reported by Medical News Today, research shows that people with diabetes feel more comfortable and comfortable using injection pens for administering insulin than using plastic syringes. Its easy use can also make them measure the dosage they need more precisely. It is this convenience that makes diabetics more routine in administering insulin compared to when they use syringes and vials.

The ease of use of this device has been shown to increase diabetes adherence in carrying out their diabetes treatment with insulin injection. In a study of 13,428 people with diabetes such as the one published in the Pharmacy Times, those who used insulin pens had lower levels of HbA1C compared to those who used syringes and vial bottles.

Lack of insulin pen
Although proven to bring many advantages, this tool still has shortcomings. Usually this item has a more expensive price than if you use an injection device made from plastic and vial bottles. When injecting, a small amount of insulin is also wasted. Some insurance also does not cover treatment using this injection pen.

As per the recommendation of the American Diabetes Association, keep an insulin pen that has been opened at room temperature and use within 28 days. Discard if it has expired even though there is still insulin left.

Make sure you have removed the needle on the injection pen. Do not store it in the area of ​​the needle attached even though the new needle because it will affect the cleanliness of the needle itself.