Why Do Babies Often Laugh When Sleeping? 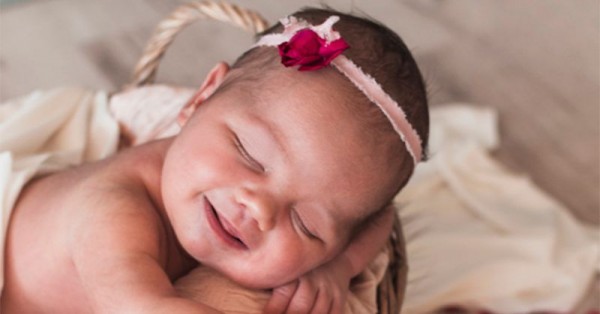 The ability to laugh is one of many markers of a baby's emotional development. Once your child understands the fun of laughing, he will do it more often. Babies don't even laugh when they interact with you, but also during deep sleep. What could be the cause?

Causes babies to laugh while sleeping
Most babies begin to learn to laugh once they reach 3-4 months of age, but this is not a benchmark for all babies. Some babies may only laugh a few months after, and this is a natural phenomenon.

First laughter usually arises because the baby sees things that he likes, such as the face of his parents or toys that hang above his bed. Babies can also laugh when they hear their own voice or because laughter makes them feel happy.

During sleep your baby sometimes laughs. Uniquely, the cause of babies laughing while sleeping is not known with certainty.

Some experts suspect that this behavior might be due to a dreaming baby, but there is no concrete method that can prove this conjecture.

Even so, there is a promising explanation about this phenomenon. Like adults, babies also experience a phase of sleep called rapid eye movement (REM).

REM is characterized by rapid eye movements accompanied by unconscious body movements. During the REM phase, the baby's breathing rate becomes irregular and can stop for 5-10 seconds.

The baby's body is also more often experienced reflexes in the hands, feet, to the face and mouth.

Reflex movements in the mouth make the baby seem to smile and laugh while sleeping. This is in line with research in the journal Nature and Science of Sleep.

The study found that babies' mouths often twitch during the REM phase.

This condition usually occurs once a baby is 10 months old. Symptoms can occur when the baby is asleep, or when the baby wakes up in the middle of sleep. In addition to laughing while sleeping, other symptoms of spastic symptoms in infants are as follows:


If your baby experiences these symptoms every day, try to consult with a doctor to find the cause. Diagnosing febrile seizures in babies is quite difficult, and laughing during sleep is not the only yardstick to determine the diagnosis.

Therefore, you need to play an active role by providing complete information about your child. Mention the various symptoms that you find and the presence or absence of changes in the attitude and sleep patterns of your child.

However, you don't need to panic. Gelastic spasms in infants are a very rare condition. You also do not need to constantly watch your child when he is sleeping. Provided that it is monitored properly, seizures during sleep will not endanger their health.

Laughing while sleeping is a normal part of the baby's sleep phase. Even adults can laugh while sleeping and this is entirely natural. The most important thing, your baby still grows and develops well according to his age.